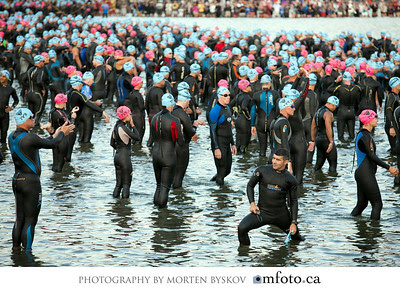 I have lived in the Okanagan for for more that 16 years and yet I have to admit that this was the first time I was able to witness the Subaru Ironman Canada in Penticton. I do believe this is the largest annual sporting event taking place in the Okanagan this year with more than 2500 participants and countless volunteers. 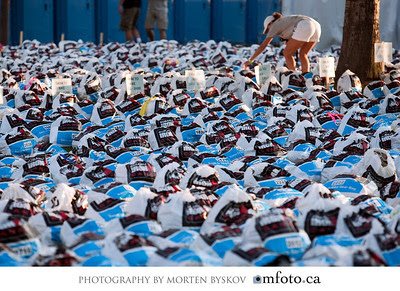 I was in Penticton covering the event for ASI Action Sports International with a group of seven other photographers. The alarm clock was set for 4:50 AM and we wrapped the day up about 20 hours later and I believe I took close to 4.000 photos. Not that I in any way want to compare our efforts to the athletes way but this was one long day of shooting.
Shooting the Ironman is something I won't soon forget. Being in this environment is very inspirational. When a twenty year local woman sang "Oh Canada" just before seven AM at the beach front in Pentiction before thousands of people I had goose bumps and was very moved. Looking around me I was clear that I was not the only one moved by this moment.
My first assignment was to cover the swim exit. It is interesting to witness the the athletes coming out of the water after the 3.8 km swim with legs like gel trying to get their balance, strip off the wet suit and head on to the bike transition. Two guys received huge cheers from the crowd as they were flirting with the cut off time of two hours and twenty minutes and just made it in time.
Next post was along Skaha Lake shooting the last leg of the race, the 42 km run. It was a fine display of endurance and perseverance from the athletes and for me it meant sitting in one spot for about seven hours shooting one athlete at a time.
From 8 PM to midnight I was shooting medals, which was a great way of wrapping up the day. You got to see the athletes at the very end of a long day. Although tired, it was easy to see the pride in their eyes.
I managed to take a couple of quick snapshots for the blog before the race start.
Share on Facebook
Posted by Morten Byskov mfoto.ca at 11:01 PM