Running the Victoria Half Marathon 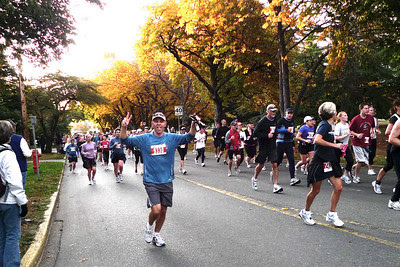 Running half a marathon has been on my list of things to do for quite some time. As a young lad and into my twenties I ran several 12K races and always enjoyed the feeling and atmosphere surrounding these events. I started training for a half marathon a few years ago but my back gave me some trouble and I never made it to the starting block. I could probably write a book full of excuses why I haven't done one yet but it would be an awful boring read. 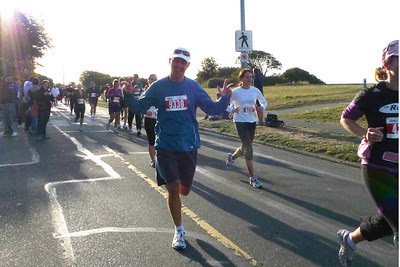 Sunday was redemption time for me in Victoria BC. It was time to try out the ol' legs and see if they would carry me he distance of 21.1K. I have been training for the event since June and despite a couple of set backs (cut a toe in August and twisted my ankle quite badly just a month ago) I felt ready to go.
These events start early. We scrambled and got the car at parked just in time and found our way to the starting line near the BC parliament building. The first kilometre took us by the harbour front and the Empress Hotel. Then up Johnson and into the rising sun. I could see at least 3000 runners ahead of me at this point, heads bopping up and down, an awesome sight in the morning light. Then through the beautiful Beacon Park and down to the water front. There was not a wind and the sun gained strength and warmed up the runners. Coming towards us at this stretch were the top athletes... man are they ever fast, running half a marathon in about half the time it takes me. This was a good inspiration and gave me a bit of extra energy. 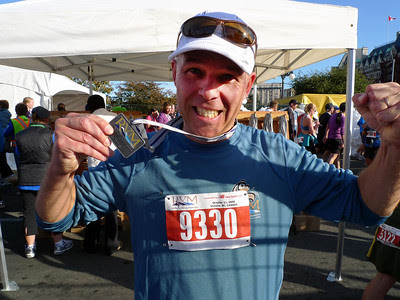 Around the 14-15K mark we ran though a nice sub division. People were out in strong numbers cheering us on, music blasting from iPods and trumpets. Around this point my legs started saying; What the heck are you doing to me? It was also around this point that I overheard other runners saying that we were right on the mark for a two hour finish. This came as a bit of surprise to me as I had anticipated a finish around 2:10-15. For a while I ran next to a blind runner and his very supportive coach/lead. The coach kept talking to 'his runner' letting him know when the hills came and also that he was on track for a two hour finish time. What a great team.
The home stretch along the water front seemed to go fast despite my legs feeling heavy at this point. At the 20K mark I heard another couple of runners mentioning that they felt they were going to make the two hour mark. This of course made me pick up the pace for the last 1K. I came in just over two hours at 2:00:27 and was very thrilled. I have photographed marathons and ironman races this summer but Sunday it was great to be on the participant side of things. Will I do it again? The Victoria Half Marathon next year will be held on October 1oth making it an 10/10/10 event. How can I miss it.
Posted by Morten Byskov mfoto.ca at 11:10 AM